*Unplanned Outing. Where to go when you don't know where to go. :)

A few of us from E369 and W372 went to Suntec office to help out today. Apparently there were too many helpers and everything was completed earlier than expected.

Together with Alvin, Chloe, Meihui, Peishan and Sandy, we went to this place call The Inle Myanmar Restaurant for dinner. This restaurant serves authentic Burmese food, which tastes somewhere between spiciness, sour and sweet as they favor tomatoes in their cooking.

If you are not sure what to order, just go for anything in the Noodle and Rice section. Everything is NICE and everything is WORTH TRYING! Price range from $5 to $10.

Alvin ordered Butter Rice with Curry Chicken, Chloe ordered their Inle Special Fried Rice, Meihui ordered a special soup-based rice noodle dish (the name is in Burmese, can't remember), Sandy ordered Crispy Noodle and I ordered Fried Kway Teow. Every dish smells GREAT and looks TEMPTING! Every ingredient used were very FRESH, especially the seafood! It doesn't taste like our local food as Burmese doesn't use soy sauce in their cooking. Every dish has a unique taste that truly tingle the taste bud!

Not forgetting Peishan, she didn't order any main dish but she ordered their specialty dessert, the Hpa Lu Da (read pa-lu-dar, the 'H' is silent). It is a dessert with rose syrup, milk, lots of hidden 'treasures' and topped off with a scoop of vanilla ice-cream. The outlook is IRRESISTABLE and the blend of sweetness and chewy items is WONDERFUL!

And not forgetting their Myanmar Milk Tea. The taste is very different from the milk tea at your local coffee shop. Their strict quality control and making of the milk tea is so good that it always taste the same no matter how many times you have being there. The blend of milk and tea is so well-balanced that the sweetness of the milk doesn't overwhelm the frangrance of the tea. What's more, the temperature is just right! The tea is warm and doesn't scald your tongue. This is very important as tea tend to turn sour when left to cool on the table. If it is too hot, your tongue will become numb and marred the taste of the tea. This milk tea indeed deserves a 10/10!

Be warned that this restaurant tend to have a lot of patrons during meal times. I recommend you come early to avoid disappointment! Haha. (Forgot to take photos...)


Later on, Peishan left as she needs to reach home early and Geogina came to join us. As it was totally unplanned, we decided to visit the Museum of Shanghai Toys (MoST), which is near Little India. For Geogina, Meihui and Sandy, it was their first time there.

The owner, Marvin is a very nice man and a good host. He opened the museum out of passion and was very hospitable to the guest. The museum displayed vintage toys made in China from the late Qing period to Chairman Mao's time. This is a very interesting and fun place to bring your friends and family for a weekend outing. If you have any friends from oversea, it would also be a great place to invite them to. This place can indeed be one of the MUST-VISIT places in Singapore!

We took a lot of pictures as usual. Haha. Here are just some of them. 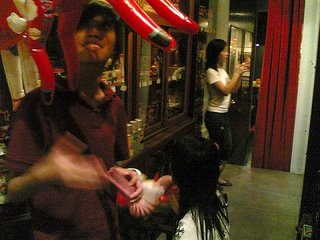 Geogina looking at the toys. 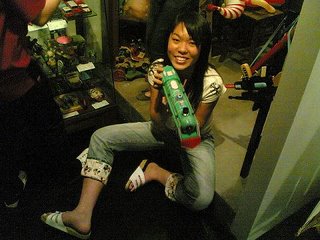 Chloe with a vintage battery-operated toy train. It still works! 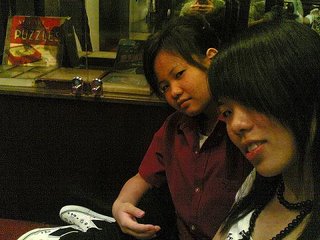 Chloe and Meihui trying to look fierce in this photo. Haha! :p 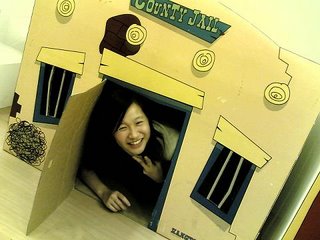 Sandy, happy to be in jail. 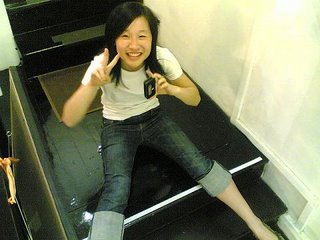 Sandy braving the heights as she pose for this photo. The stairs are quite steep. :) 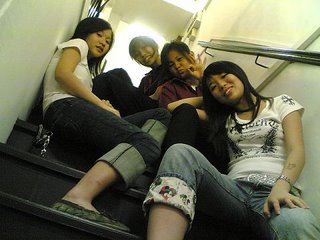 Just the sisters. This is one of my favourite photo. 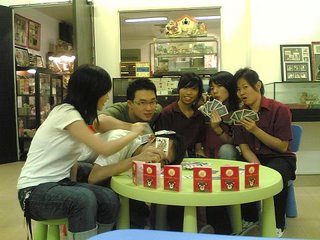 Playing cards together. Alvin is not in his best form today. Haha! 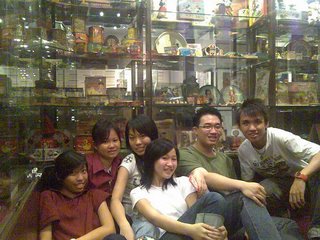 All of us posing with the toys. :)

Hey people. I am going to pen a fantasy story that is biblically inspired ever since the success of "The Da Vinci Code". No worries here, I am not going to quote some weird doctrines nor am I going to twist the Christian faith. It will just be a simple, healthy fantasy fiction for reading pleasure.

You will be able to find Chapter One onwards on my blog. Since it is a Fantasy story, it doen't really go into mainstream Christianity. However, if I do think of more suitable stories, I will post it here again.

Two human figures were moving through the wilderness. There was no road nor path paved out for them. Bare-footed, they walked aimlessly and each of them wore only a piece of rugged fur that barely shelters them from the chill.

The furs reeked of blood. It was the first time they ever killed another creature for covering. They wondered why they never felt the need to wear something before that.

The man looked back at his weaker companion who was struggling to keep up. As he looked at her, joy, anger and hope filled him.

Just a few days ago, he and his beloved could soar in the sky to appreciate the beauty of creation. They could dive deep into the waters and yet breathe, allowing them to experience the magnificent marine life. They had command over every other creature, every inanimate object and even the weather.

When they were cold, they could just command fire to ignite.

When they needed to water the plants, they could command the heavens to rain.

They could shift boulders and mountains by merely ordering them.

They enjoyed the daily pleasure of meeting their Creator face-to-face.

Nothing can harm them and nothing would disobey them. They could have had anything in the Garden, almost everything.

“Now everything was gone, all because of this woman.”

Both of them longed to return to the Garden. Both of them missed their Creator. However, a moment of disobedience had cost them everything.

The Creator had cast them out. Fearsome creatures and flying swords now guard the entrance to the Garden.

What’s more, the accursed fruit had poisoned their mind. The knowledge of Evil clouded their thinking. Their thoughts were darkened and their abilities were lost.

The beasts no longer listened to them.

They could no longer fly nor breathe under water.

When they used to just flick a finger to ignite fire, they had to rub stones and branches until their hands were blistered to create it.

Even though the man was angry and tried to push the blame to the woman, he knew in his heart that he shouldn’t have eaten the fruit in the first place. He knew he could have stopped her, but he choose to follow. He knew he had failed in his part to obey the Creator.

And he also failed in his part to protect the very companion who had taken away his loneliness.

“Adam, could we find a place to rest? I am tired.”

It's being a few weeks since I update this blog. I was busy (and lazy) to do so (Ops!). Anyway, I am done with my attachment for a while so I will be looking forward to post more photos and fun stuff on our blog.

No matter what path you choose and what you decide to do next, let us be sure that we are really seeking God and hearing from Him before we decide on what we should and should not do.

Then again, there are some questions where the answer is just too obvious.

The next post may be as soon as tomorrow. Keep one another in prayer. God bless you.